View from Hamneskär - The medieval fortress Carlsten on Marstrand

Our Nokota horses emigrated from the prairies of North Dakota to our small horse ranch on the west coast of Sweden in late November and are now true members of our ancient seafaring Viking tribe.

Thinking about these three Nokota horses and how they truly light up our lives, it crosses my mind that there are three other light sources not so far from our ranch that’s had an important impact on the life at the Swedish west coast for a long time.

I had the rare opportunity to visit some of the lighthouse islands along the coast a few years ago when I was involved in doing some technical designs for various building restoration projects including reverse osmosis fresh water systems (turning sea water into drinking water) and other HVAC installations. I had the chance to take some photos and now I cannot resist sharing them as a way to show you the surroundings, which we share with our Nokota horses.

The lighthouse Pater Noster is situated on the island of Hamneskär at the coast, north of Gothenburg. It belongs to a group of 97 islands known by the medieval mariners to be particularly difficult to navigate, full of treacherous reefs and strong currents. Thus requiring many a prayer for a safe passage, thereof the name Pater Noster. It is still only possible to land in calm weather. At one time we had to use a helicopter to reach the island at an urgent construction inspection.

The lighthouse was thoroughly restored a few years ago and the island is open for visitors. The old buildings contain a small conference center and a hostel. 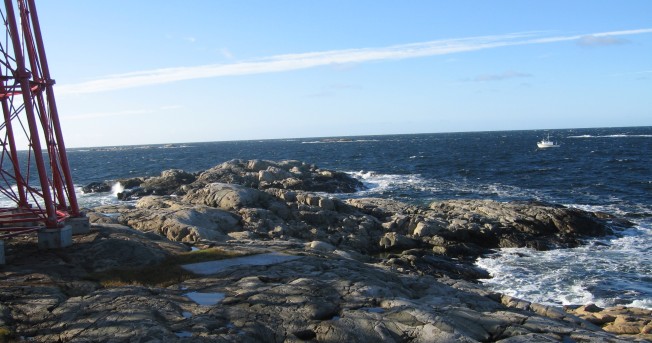 View from Hamneskär - The easternmost part of the North Sea

View from the Pater Noster lighthouse

The buildings on Hamneskär as seen from the Pater Noster lighthouse

Nidingen is the next lighthouse island, situated 5½ nautical miles off the coastline, which is just a few miles from our horse ranch.

Nidingen is a small flat grass covered island surrounded by treacherous sand reefs that has always been a danger for mariners. Built by the Danes in 1635 as the first twin lighthouse in the world. In 1645 it became the first Swedish lighthouse. The stones from the old lighthouses is believed to come from the medevial fortress of Varberg.

Nidingen is also an important bird watching station and every year 10 000 birds are ringed. Nidingen is a nature reserve and the only place known in Sweden where there are nesting kittywakes (Rissa Tridactyla). It is however open for visitors and has a modest conference center and a hostel. Highly recommended for any visitor.

Tylön lighthouse - as seen from the mainland

Tylön, the final lighthouse island situated 70 miles south of our horse ranch, just off the coast from Halmstad. The Tylön island is mainly covered by green meadows and is a nature reserve well known among nesting birds like eider, black-backed gull and herring gull. Tern, eared owl and peregrine falcon are also among the visitors.

The lighthouse was built 1870 but is no longer in use, it was closed 1968. The island was used by fishermen during the seventeenhundreds and there are also ancient remnants on the island dating back to the bronze age.

Visits to Tylön is prohibited during most of the year for the protection of the birds and the buildings are more or less decaying.

Our transportation the Sea Rescue vessel - coming in to Tylön

Tylön island with the lighthouse